A trip to North Wales wouldn’t be complete without visiting the summit of Snowdon. There are six wonderful walking trails to experience but if you don’t feel that you can manage these, why not take the train? The Snowdon Mountain Railway has been transporting sightseers to the summit of Wales’ highest peak since 1896. The journey delivers a memorable day with amazing views and a slice of history. More than 12 million people have taken the train up Snowdon since it opened and the outing remains as popular as ever.

The idea of a railway to the summit of Snowdon was first discussed as early as 1869. However, George William Duff Assheton-Smith, the owner of the land, objected to the plans as he felt the railway would ruin the landscape. When plans for a railway from Porthmadog to the summit were mooted and the narrow-gauge railway to Rhyd Ddu opened, LLanberis suffered a loss of trade. Assheton-Smith was then forced to withdraw his objection to the Snowdon train.

The precise date that the first building at the summit was built isn’t known. By 1820, there was definitely a structure there and it wasn’t long after this that you could buy refreshments . A multipurpose building designed by Sir Clough Williams-Ellis was constructed in 1930. This was replaced by a new building and station which opened in 2009.

The locomotive fleet has been supplemented by four diesel locomotives and three diesel-electric railcars. It is still possible to reach the summit by steam train. Check the timetable for steam train departures and book in advance to secure your place.

There is much to see on the journey from Llanberis to an altitude of 1085m. Shortly after departing from Llanberis you will coross two viaducts where the  Ceunant Mawr waterfall plunges into the gorge below. It isn’t long before you get your first glimpse of the summit and you can also admire Moel Eilio. Later, Moel Hebog comes into view. Steam trains refill their water tanks at Halfway Station before the final ascent. After you leave Halfway Station, you can enjoy gorgeous views of the valley below and then a stunning rocky landscape before arriving at the UK’s highest visitor centre. 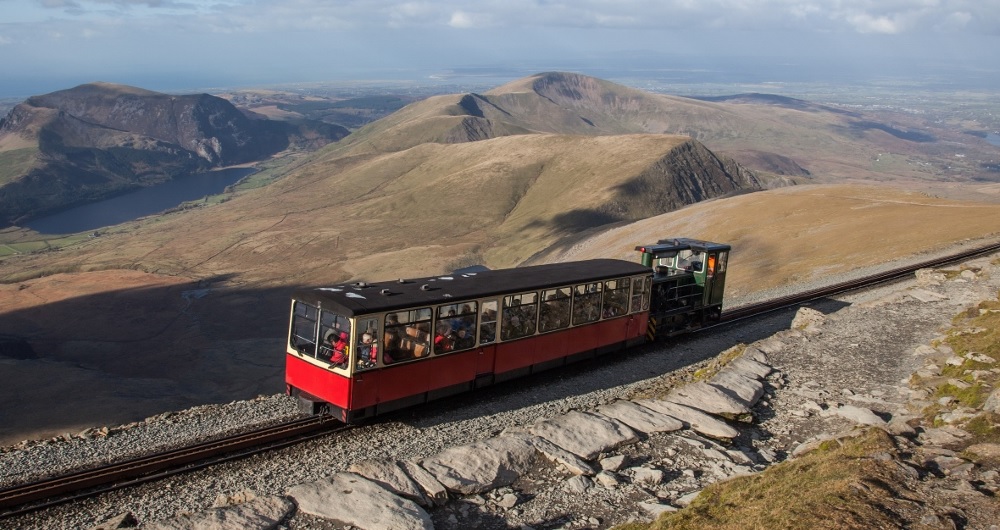 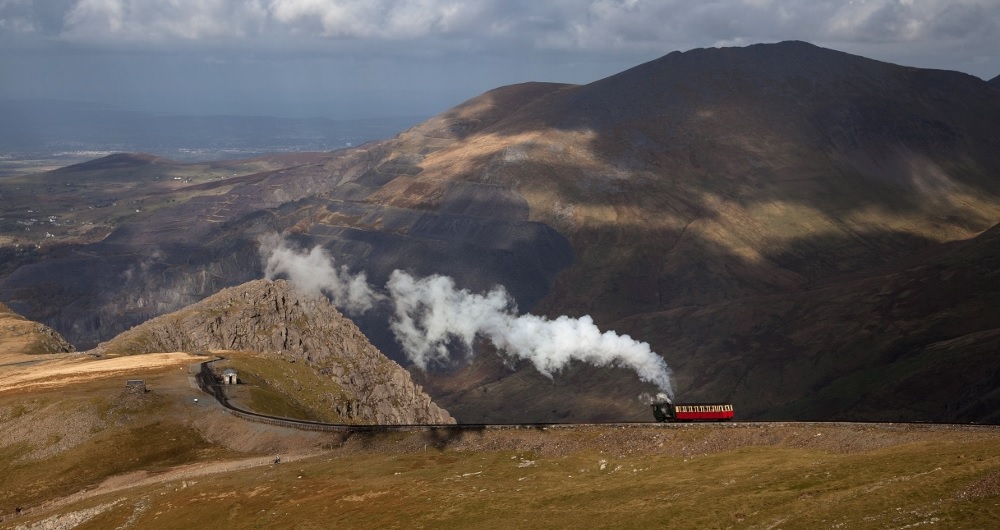 The Snowdon Mountain Railway runs from mid-march until the end of October, weather permitting. During March and April, the train runs between LLanberis and Clogwyn which is roughly 3/4 of the way to the summit. Steam trains run from May until September and always to the summit. Please be aware that Clogwyn is an uncovered station with no facilities.

Tickets are available in advance online or on the day of departure at Llanberis Station. During peak periods, tickets can sell out weeks in advance. You can book a return journey or a single to the summit and then walk down. Single tickets are not available for the steam services. Single tickets from the summit or Clogwyn cannot be pre-booked and are available from the stations on the mountain on a standby, first come, first served basis.

The diesel services up the mountain are wheelchair accessible but travellers should call the Snowdon Mountain Railway (1286 870223) to discuss their requirements before booking. Dogs are not permitted on any of the trains.

At the time of writing, the cost of a return ticket on a diesel service is £32. A return trip on a steam service is currently £40. Early bird discounts are available for the 9am departures. There are concessions for children aged 15 years and under and disabled passengers. Children 3 years and under travel free.

From the Woollen Mill, drive north on the A487 and then turn right in Bontnewydd towards Llanberis. Follow the signs to Llanberis and you will find the station at the far end of the town on the right. There is a car park to the left which is comparatively large but which can still fill up at busy times.

Are there toilets on the train?

There are no toilets on the trains or at Clogwyn Station but there are good facilities both at LLanberis Station and the summit of Snowdon.