The legendary trail of Dinas Emrys

You will love this wonderful walk through woodland which features gorgeous waterfalls cascading into pretty pools and streams. At the summit, there are fabulous views across the valley to Llyn Dinas and you will discover the remains of a tower and ramparts which were fortifications belonging to the ancient princes of the region.

This is a fabulous walk which combines stunning scenery with history and local legend. It is said that King Vortigern wanted to construct a castle at the top of Dinas Emrys but the walls kept falling down. The wizard Myrddin Emrys (Merlin) advised him that two dragons were battling each other beneath the site of the castle and their conflict was causing the walls to fall. Vortigern’s men dug into the mountain and released the two dragons which proceeded to fight each other above ground. The white dragon fled and the red dragon then returned to his lair, enabling the castle to be completed. In honour of Merlin, the mountain was named Dinas Emrys and the red dragon became the symbol of Wales.

Duration: roughly 2 hours if you linger at the summit for while

Terrain: a mixture of woodland paths, rocky paths and a couple of relatively steep clambers up rocky slopes 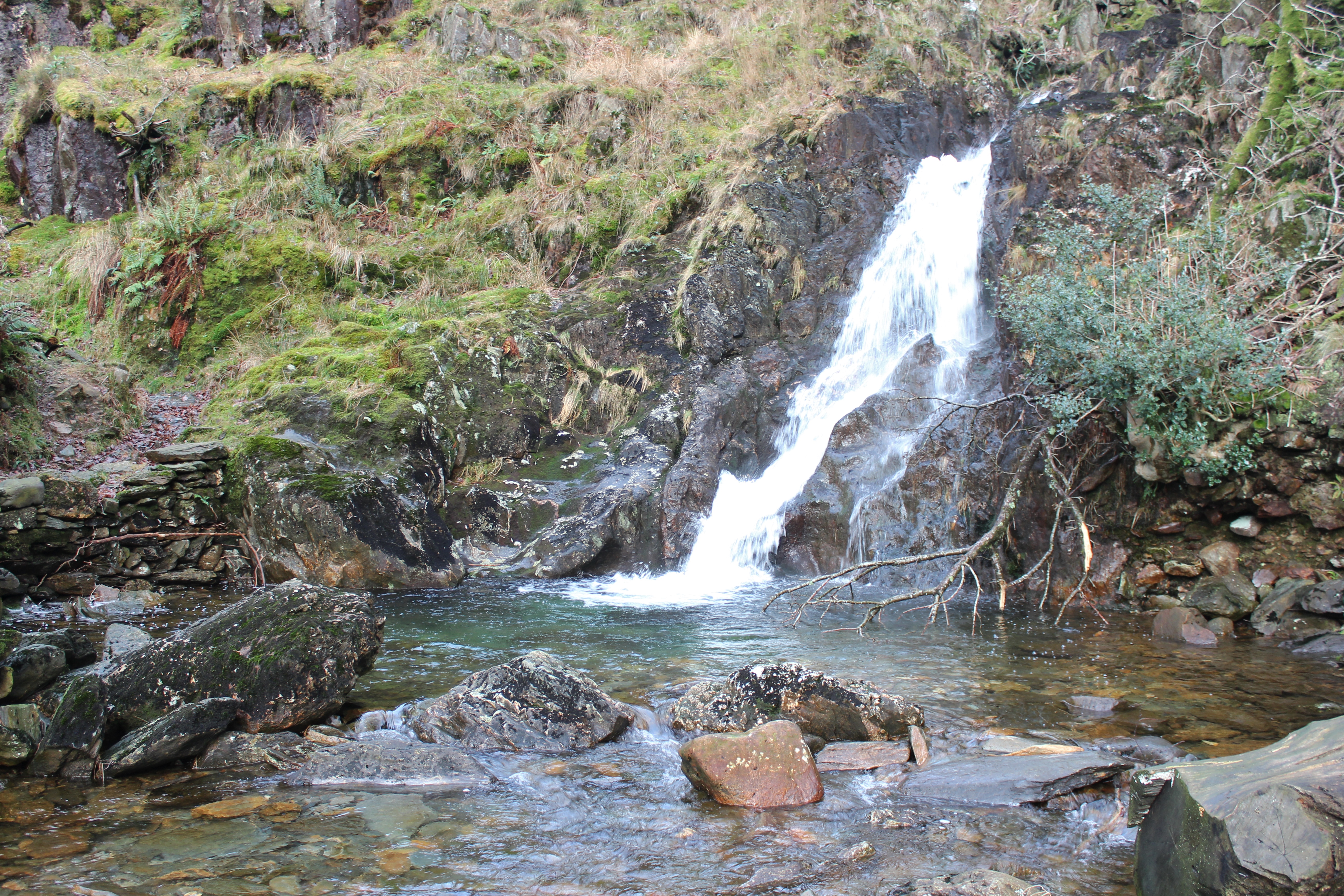 The walk begins in the National Trust Princess of Gwynedd centre at Craflwyn near Beddgelert where there is a car park. At the back of the parking area, walk through the gate into beautiful woodland. Follow the pink markers featuring yellow arrows to remain on the right trail. You will quickly arrive at the fabulous dragon bench pictured above which is carved from teak root. The first lovely waterfall is just beyond the bench and the path then rises up alongside the stream.

Keep following the trail through the woods until you reach an even more dramatic and beautiful waterfall which cascades into a deep pool. Cross over the stream on the stone bridge and follow the path into a more open area with views over farmland. 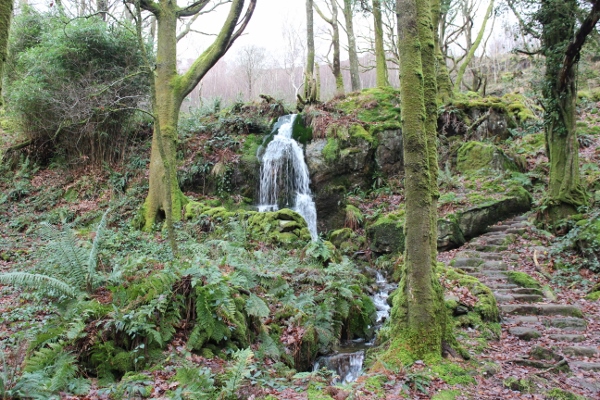 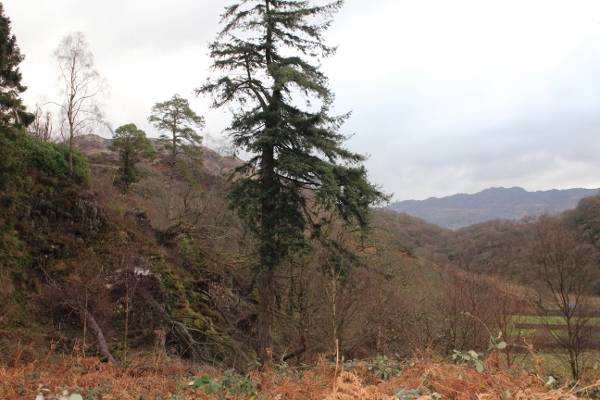 Continue along the trail past a stone wall until you reach another fork in the path and bear right. You will then need to scale a ladder stile which can be tricky if you have large dogs with you! It is also important to note that dogs must be kept on leads for much of this trail as they may scare grazing livestock. But in the winter, you could find that there are no sheep around.

The path now wends its way through woodland and open country towards the final ascent. It is necessary to scrabble your way up a couple of relatively steep rocky areas which can be very slippery in wet weather but your efforts will be rewarded by the spectacular views at the summit.

Take some time at the summit to soak in both the history and the panoramic views. Look northeast and you can see Llyn Dinas beneath you. Turn around to admire the peaks rising up above Beddgelert.  This is a wonderful spot to enjoy lunch or a snack, as long as the wind isn’t blowing too hard.

To return to the car park, retrace your steps and you will probably notice a hundred interesting things that passed you by on the way up! This is a relatively easy walk with a only a few steep sections and these are very short. Allow 2 hours to complete the round trip with time to rest at the summit. 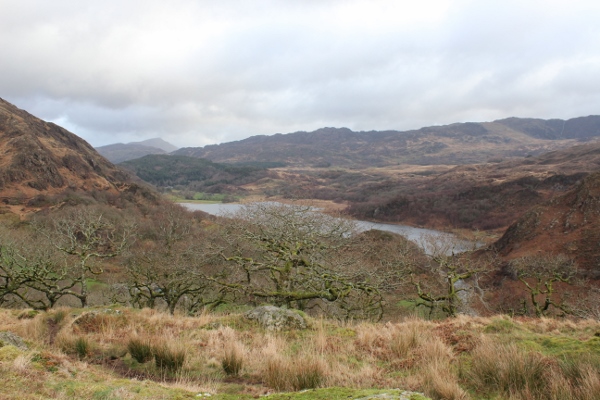 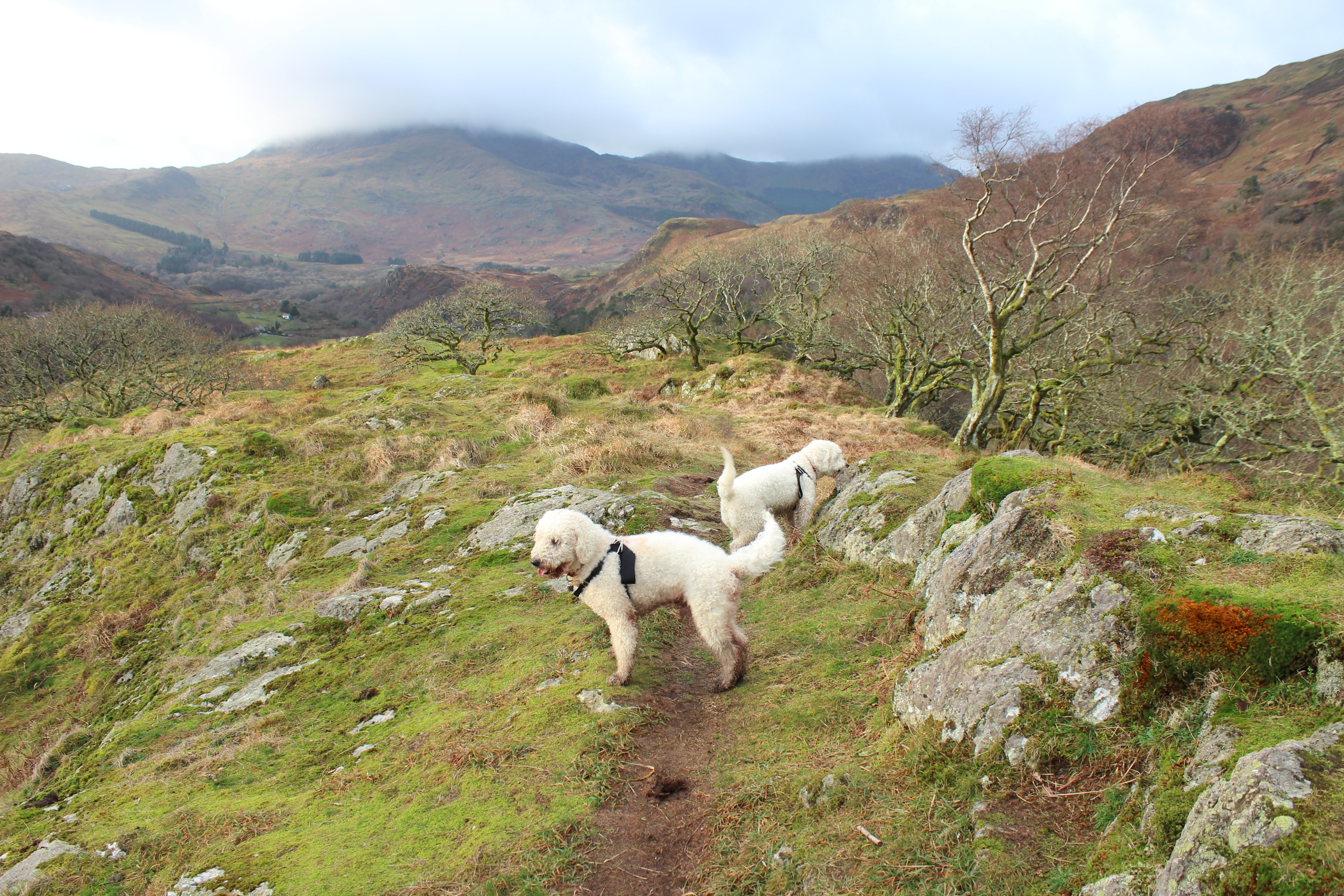 From the Woollen Mill, Drive to Penygroes and then turn right at the COOP store. Turn right at the next T Junction and then right again at the next T Junction. Follow this road past Nantlle and up into the mountains. You will eventually arrive at the Village of Rhyd DDu where you should turn right towards Beddgelert. When you arrive in Beddgelert, follow the road through the village and go straight on at the bridge. Continue on this road for roughly a mile and you will see the car park on the left.